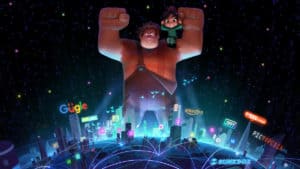 “Look at all this stuff” – Ralph

Walt Disney Animation Studios has released the Official trailer for Ralph Breaks The Internet: Wreck-It Ralph 2 on their YouTube channel.

If you remember back to a Disney YouTube video from 30 Jun 2016 John C. Reilly announced the sequel to Wreck-It Ralph. Ralph Breaks The Internet: Wreck-It Ralph 2 was to be released March 8, 2018. Ralph finds himself leaving the arcade, subsequently getting plugged into the internet, does Ralph wreck the internet?

Fast forward to D23 Expo 2017 with an epic appearance by all the Disney princesses for Wreck-It Ralph. It was announced that all the original voice actresses from all the iconic movies will voice their princess characters in a scene from the new film. During a tour of the internet with new character Yess, a visit to Oh My Disney finds Vanellope stumbling upon a dressing room filled with every Disney princess in recent memory, including Paige O’Hara (Belle) and Jodi Benson (Ariel), Linda Larkin (Jasmine), Anika Noni Rose (Tiana), Irene Bedard (Pocahontas), Mandy Moore (Rapunzel), Kelly MacDonald (Merida), Kristen Bell (Anna), and Auli’i Cravalho (Moana), who all appeared on stage at D23 2017.

After enjoying the first movie Mouse Travel Matters is looking forward to another hilarious chapter with Ralph Breaks The Internet: Wreck-It Ralph 2. Are you excited for the new film? What movie are you waiting for?

Wreck-It Ralph 2 is scheduled for a Thanksgiving release in theatres November 21, 2018. Trailer Below