Currently served at Kona Cafe and Capt. Cook’s, this decadent breakfast classic has been on the menu at Disney’s Polynesian Village Resort since 1971.

What is Tonga Toast?

Tonga Toast is thick-sliced sourdough French Toast that is stuffed with a banana. Then it is covered in cinnamon sugar and fried. This breakfast staple at Disney’s Polynesian Village Resort is amazing. 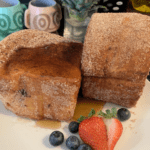 © 2021 Mouse Travel Matters Read our Privacy Policy. for information on how we protect your personal information while browsing this site.
MouseTravelMatters.com is an unofficial site and is not in any way affiliated with The Walt Disney Company. For official information about the Walt Disney Resort, visit Disney.com.