Everyone loves a churro! With this recipe, you can make the tasty sticks of fried dough right at home.

Disney’s parks may still be closed around the world, but fans are keeping the magic alive by watching ride-videos of some of its most iconic attractions, making Disney-inspired recipes and catching up on Disney vacation planning. Now Disney is making it even easier to feel like you’re in the Magic Kingdom because they’ve finally spilled the recipe for their famous churros so you can make them at home.

The recipe serves four people and is a perfect snack to enjoy while homeschooling, or simply catching up to the latest Disney+ release.

They are pieces of pastry dough often twisted into sticks, then deep fried and rolled in cinnamon sugar.

Churros are Spanish in origin but eaten all over the world, especially at fairs, carnivals and theme parks (like the Disney parks!). 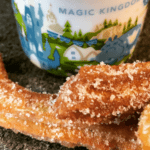